RAHMAN’S FAMILY AND POWER IN TAJIKISTAN 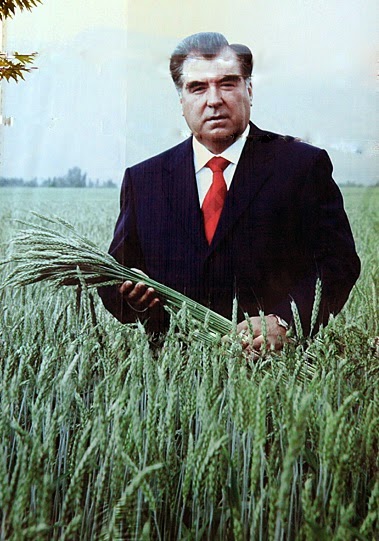 A giant poster covers the façade of the Agriculture Ministry in central Dushanbe. It shows President Emamali Rahman standing in a field at harvest-time with a sheaf of wheat in his arms.

The imposing poster – one of hundreds throughout the country – is meant to remind people of the benefits Tajiks have reaped from their president’s 21 year- rule.

The more cynical among them, however, point out that when it comes to reaping the benefits, the president’s family seem to have had a particularly successful harvest.

President Rahman  has nine children. Most Tajiks can name all seven of his daughters and his two sons. But two of them are particularly well known – his daughter Azada Rahmanova, , and his son Rustam Emamali.

Azada who is Rahman’s second child, served as cultural attaché in the Tajik embassy in Washington before moving to her current role as  deputy Foreign Minister.

Azada is married to Jamaliddin Nuraliev – currently deputy Finance Minister and reportedly one of the wealthiest men in the country.

Many observers are now asking if Emamali Rahman might have presidential ambitions of a higher kind for his son.

Following the precedent set by the ruling Aliyev family in Azerbaijan, there’s much speculation that Rustam is being groomed to succeed his father in the next elections in 2020.

The husbands of some of President Rahman’s other daughters have also landed top jobs.

One, Shamsullah Sahibov,  is currently Tajikistan’s commercial attaché in London. Another, Mahmadzahir Sahibov, is in charge of the country’s overseas trade missions.

It’s a situation which infuriates some of Tajikistan’s opposition leaders.

“Over 50% of economic opportunities and facilities in the country belong to this single family,” says Rahmatullah Zairov, the head of the Social Democratic Party. “They regulate them, they possess them. It’s too much.”

Another member of the family who has frequently been in the headlines in Tajikistan is the president’s brother in law Hasan Asadullahzade.

However Deputy Economy Minister Umed Dawlatzad, who used to be the deputy head of Oryonbank, plays down the links between the bank, the family and big business.

“It’s more important for me to know that all companies that you say belong to Oryonbank are working well, he said. [And that they are] increasing our productivity and creating more jobs for our people and contributing to the budget of the country.”

Other supporters of the president,  like veteran politician Sultan Mirzashaev,  argue that it’s natural that Mr Rahman should want to surround himself with competent and reliable people and that it’s irrelevant that some also happen to be his relatives..

“Our President has many children and relations,” he told the BBC. “Do you think they shouldn’t work in Tajikistan just because they are from the presidential family? Of course they should. Besides, they are not ignorant and all of them are well-educated and experienced people”.

Access to the Tajik first family is strictly controlled by the security services, but occasional glimpses into their lifestyles do sometimes emerge.

Earlier this year some footage was leaked to social media sites, showing President Rahman leading the celebrations at his son Rustam’s wedding.

The footage showing the president dancing enthusiastically, banging out a tune with a spoon on an official’s head and singing out of tune with a professional singer,  prompted much hilarity in Tajik cyberspace.

But observers were also quick to point out that the  lavish eight-hour party at an official government guest house, was a far cry from the modest three-hour celebrations, which Mr Rahman himself has decreed the acceptable norm for ordinary Tajiks in a new law to curb the tradition of spending huge amounts of money on weddings.

Dadajan Atavullaev, is the Berlin-based opposition activist who got hold of the wedding video and broadcast it on his internet TV channel. After the footage was aired he was briefly detained at Moscow airport, and later denied entry to Georgia on a business trip, events which he claims were retaliation for the video.

“I found out later that Rahman’s regime has put my name on Interpol’s wanted list as a terrorist,” he says  “All I wanted to do was to show that this government based on family ties doesn’t care about people. They have turned Tajikistan into a family business.”

But few Tajiks based inside the country are willing to openly express their discontent with the concentration of power in the hands of a few from a single family.

Some see the privileges of the ruling family as an unavoidable fact of life in a post-Soviet country, and most  fear the possible consequences of speaking out.

Those that do, often refer to the country’s anti-corruption law that prohibits state officials from giving jobs to their close relatives.  Why, they wonder, doesn’t the president abide by his own law?