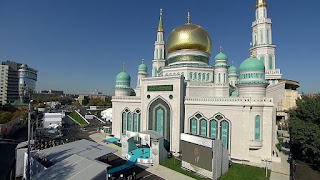 
“Russian Tatars have been following Islam since the 8 th century. And that is the difference between Islam in Russia and in the West.”


Sitting in his office in Moscow’s newly built Cathedral Mosque, on Olympic Prospect, 34-year old Mr Abbasov, an ethnic Tatar, is very much the voice of official Islam in Russia.


He’s wearing a neat suit and tie, with a white turban and an Islamic clerical robe draped over his shoulders.


He tells us he’s been in the job for two years and relishes the challenge.


“The Muslim community is growing faster than ever,” he says. “In Moscow alone we now have over two million Muslims .”


The imposing gold-domed mosque, which can accommodate 10,000 worshippers, is one of Moscow’s newest landmarks. It was opened in September 2015 with a grand ceremony attended by President Putin, and his Turkish counterpart Recep Tayyip Erdogan.


Just one week earlier Russia had begun its surprise intervention in Syria – a move which would eventually lead to a breakdown in relations between Moscow and Ankara.


In a speech at the opening President Putin said the mosque would be a centre for tolerance and multi-faith understanding. But some critics accuse the Russian government of failing to address the real needs and concerns of its estimated 20 million Muslim citizens.


“They’ve built this 200-million- dollar mosque for 10,000 people, in the centre of town. Meanwhile the whole of Moscow with its growing population of Muslims has only four mosques with much smaller capacities. Muslims in Russia are second-class citizens.”


The lack of mosques was a problem which came up in almost every conversation I had with Muslims in Moscow. Many were migrants, either from Russia’s restive North Caucasus region, or from the Central Asian republics of Tajikistan, Uzbekistan and Kyrgyzstan. They’ve arrived in Moscow in their hundreds of thousands, in recent years, searching for work.


At a restaurant in the historic Taganka neighbourhood, Izzat, the owner who is from Tajikistan, told me hundreds of people now use the small praying area he’s set up for customers.


“On Fridays this place is always overbooked”, he said. “Muslims have no other place nearby to go.”


“There are many predominantly Muslim areas in the capital with no mosques at all,” says Maxim Shevchenko. “The authorities oppose any plans to build new mosques. As a result, most of Moscow Muslims have to travel a long way to prayers.”


Lawyer Rustam Qasimov, originally from Uzbekistan, says the problem is that although Islam is the country’s second largest religion, few officials really buy in to the idea that Russia is a multi-cultural country.


“The Russian Federation is supposed to be a secular entity, but it’s constantly tilting towards Orthodox Christianity”, he told the BBC. “Anyone outside the fold is presumed to be opposed to the government. “


Mr Qasimov said attitudes like this were leading to a growing sense of alienation among many young Muslims, and as a result some were turning to extremism.


Last July Russian Deputy Foreign Minister Oleg Syromolotov told journalists more than 2200 Russian citizens were now fighting with IS, in Iraq and Syria. When President Putin announced that he was intervening in Syria, this was one of the reasons he gave.


Officially the Islamic establishment in Russia supports the Syrian campaign.


“When Western countries tried to depict Vladimir Putin as a villain in the Syrian war we had to defend him”, says Deputy Mufti Abbasov. “This war is against a global phenomenon of terrorism that threatens all of humanity.”


But when I speak to worshippers leaving the mosque after prayers some rather different views emerge.


“I am against Russia’s military involvement in Syria”, says Aslanbek from Dagestan in the North Caucasus. “Those bombs are being dropped on thousands of innocent Muslims who have nothing to do with politics. Hospitals and schools are being destroyed. How can one support such an act?”


“Killing people is a condemnable act in any religion,” says Magamed from Chechnya. “I don’t support Russia’s military campaign in Syria. Why should I? Any problem could be solved peacefully. All the warring sides should sit down at the negotiating table.”


One striking thing about the new mosque is that most if not all the clerics who run it are ethnic Tatars, whereas most of the people who come to pray are from the Russian North Caucasus or Central Asia. It’s a pattern which Maxim Shevchenko says is replicated across the country.


“The entire Muslim hierarchy in Russia belongs to the Tatars, “he says. “All official Muslim clerics are Tatar and all Friday sermons are given in Russian and Tatar languages.”


What this means is that for many worshippers prayers are conducted according to traditions which are alien to them, and sermons are delivered in a language which they don’t fully understand.


This is another factor, observers say, which could be leading young men away from official mosques and into radical groups.


Askat, a taxi-driver from Kyrgyzstan is a typical case.


“I have lived here for so long, he says, but I don’t have a good command of Russian.”


Askat, tells us he wishes he could go to a mosque his own neighbourhood, and jokes that it would save him gallons of petrol monthly.


But under his cheerful exterior a worrying sense of exclusion emerges. He shows us the job adverts in the local newspapers. Each one openly says they are looking for a “Slav”.


“How can I get a better job here?” asks Askat. “People here don’t tolerate us.”


It’s clear there’s a still a long way to go before Moscow’s Muslims really feel part of the mainstream.
Posted by D at 12:42 am 0 comments